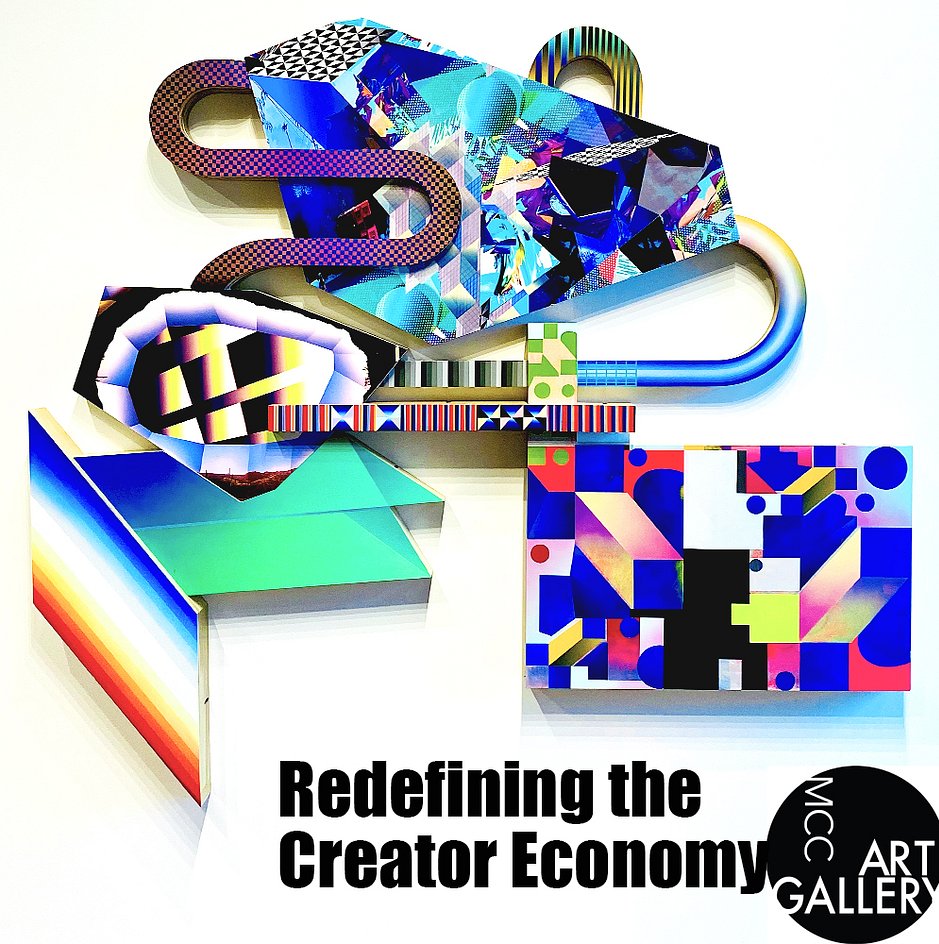 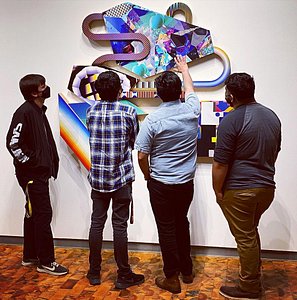 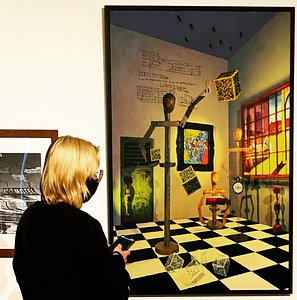 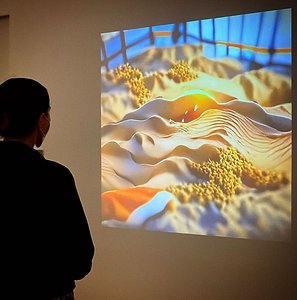 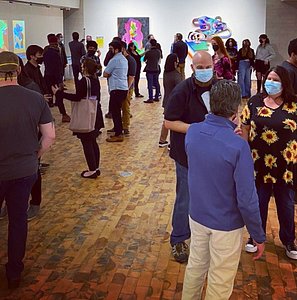 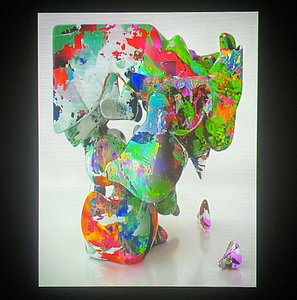 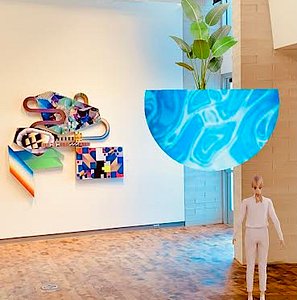 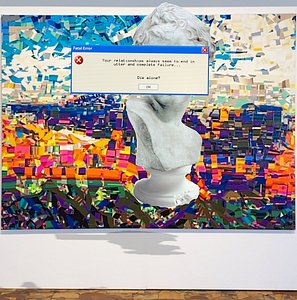 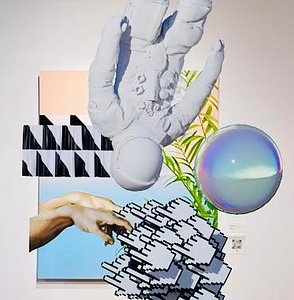 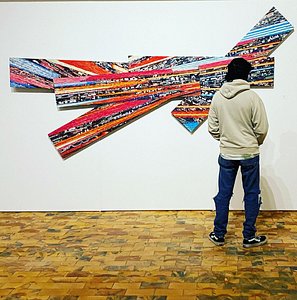 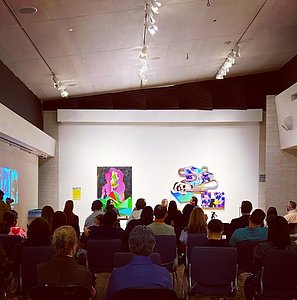 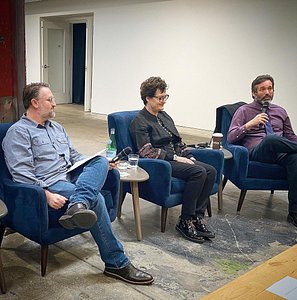 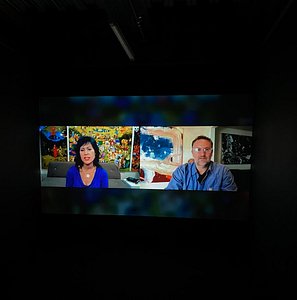 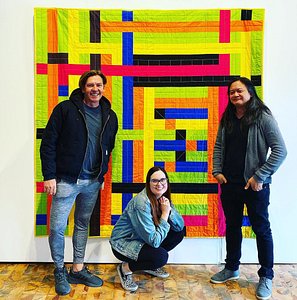 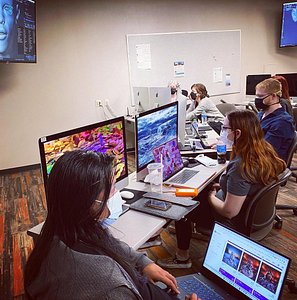 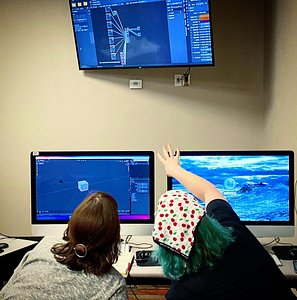 Have you ever wanted to explore the digital arts with some of today’s most inspired artists? Come join three of the valley’s leading artists for demonstrations on how to create art using AR (altered reality) and VR (virtual reality) experiences, glitch aesthetics and corrupted data, and video and internet imagery.

What you should bring.

You must bring your own source material and laptop computer to work on. After a 15 minute demonstration by each of the artists, the attendees will break out into smaller groups so that the workshop leaders can mentor students and artists individually.

Get your work in an exhibition!

Every work completed in the workshop sessions will be uploaded to the projectors, given a QR code or displayed in the gallery in an appropriate manner for the rest of the run of the exhibition of Redefining the Creator Economy at MCC Art Gallery. (Works may not violate standards of public decency or include explicit nudity, sexism, racism, or homophobic content).

James Angel
The breadth of Angel’s art practice includes investigations into issues like science and physics, mutation and adaptation, non-linear dynamics and quantum mechanics, as well as science fiction and speculative futures in an effort to better understand our place in the cosmos. Motifs from geometry, iconography, nature, and the digital realm all collide on Angel’s canvases, which speak to the different types of encounters we can have within the visual spectrum. In the past decade Angel has also incorporated VR / AR activations into his work, which seamlessly blend analogue gestures with virtual reality. James Angel is recognized as a major contributor to an emerging downtown Phoenix arts scene. He is one of the founders of the artist collective 3CARPILEUP and the annual Chaos Theory event. Angel has studied under and worked with several well-known artists and publishers and has exhibited in many galleries and museums. Most recently his work was included in the Bushwick Open Studios Event in New York, the Torrance Art Museum in California and awarded a place in Tilt Gallery’s recent juried exhibition, Infinite Possibilities: Art of Tomorrow.

Samantha Lyn Aasen is an artist adapting to the southwest, as she holds on to her Midwestern mentalities. Her suburban upbringing has her questioning female relationships and societal standards on sexuality. Samantha identifies herself as a feminist artist. She uses her art as an exploration of desire and repulsion embedded in girlhood and within American consumer culture. Samantha has had exhibitions in Indiana, Arizona, Illinois, Nebraska, Maryland, and the UK. She holds a Bachelor’s of Fine Art in Photography from Herron School of Art and Design at Indiana University and a Studio Art MFA with an emphasis in Intermedia from Arizona State University. Recently she attended the Feminist Artist Conference Residency in Toronto, Canada. Currently she teaches at Phoenix College and volunteers with Girls Rock! Phoenix.

Rembrandt Quiballo
Rembrandt Quiballo’s work investigates the moving image by investigating mass media and its effects on different social and political histories. Quiballo was born in the city of Manila in the Philippines where political unrest would compel his family to leave the country, eventually immigrating to the United States. Quiballo received a BFA in Painting and a BA in Philosophy from the University of Arizona. He earned his MFA in Photography at Arizona State University and his works have been exhibited nationally and internationally in Albuquerque, Los Angeles, Chicago, New York City, Cairo and Berlin. Quiballo is the recipient of numerous awards, including the ASU GPSA Research Grant, the SPE Student Award, the Nathan Cummings Travel Fellowship and the Contemporary Forum Emerging Artist Grant. He is current based in Phoenix, Arizona where he is the arts editor for JAVA Magazine and he writes art criticism for journals like Southwest Contemporary and Hyperallergic.

Artist Talk: What is the Future of the Creator Economy?

The artworld changes fast, and today it is experiencing one of its greatest transformation since the invention of the internet and online art sales. This talk will explore the explosion of the NFT (non-fungible token) market with some of the most celebrated artists, platform designers and critics working in the field today. The conversational format will allow the audience to learn more about how NFTs have Redefined the Creator Economy over the last five years by changing the landscape of how creators in every field of artistic production can benefit from the fruits of their creativity. We will also discuss the role that internet art, video art, digital art, augmented realities, glitch art, and post-digital art play in the evolution of a technological renaissance that mirrors the artistic revolutions of the past by pursuing new and unforeseen possibilities for artistic expression.

The talk is free and open to the public.

We will also be live streaming this talk on FB, IG and Clubhouse for those who want to view it from home.

Chris Trueman
Chris Trueman is an interdisciplinary artist working at the intersection of the analogue and the digital. His work has been exhibited in numerous exhibitions in Los Angeles, San Francisco, Washington DC, La Jolla, Seattle, and internationally in Milan, Paris, Berlin, Beijing and Brisbane (AUS). His work has also been exhibited at numerous art fairs including the Dallas Art Fair, Pulse New York, Art Aspen, TX Contemporary, Pulse Miami and ArtMRKT San Francisco. His work is currently represented by galleries across the US and abroad. He was also a Northrup Grumman Visiting Artist/Scholar at the Museum of Art and History Lancaster where he also had a solo exhibition entitled “Slipstream”. Trueman is a graduate of the San Francisco Art Institute where he earned dual BFA degrees in Painting and Digital Media. He completed his MFA at Claremont Graduate University and he is also the founder of CreatoRanch, an inclusive platform for artists working across a broad spectrum of mediums and interests. Trueman currently teaches at Chaffey College and has previously taught at Chapman University, Fullerton College and Santa Ana College.

Lindsay Scoggins
After receiving millions of views on her earliest Youtube works in 2008, Lindsay’s work exploded onto the art scene where she has become recognized for the kind of mash-up compositions that bring together elements from the media stratosphere in order to produce images of our collective consciousness. Her work has been exhibited internationally in museums, concert tours, and large scale architectural installations. Some of her most notable exhibitions include showing at the Guggenheim on four different occasions as well as the LA Art Show, Art Wynwood Contemporary, the Empire State Building, Radio City Music Hall, Coachella and the Hollywood Bowl. Her work was just included in the Every Women Biennial and continues to receive laudatory reviews and press from some of today’s leading art magazines. She is currently based in Los Angles.

Rembrandt Quiballo
Rembrandt Quiballo’s work investigates the moving image by investigating mass media and its effects on social and political histories. Quiballo was born in the city of Manila in the Philippines where social and political unrest would compel his family to leave the country, eventually immigrating to the United States. Quiballo received a BFA in Painting and a BA in Philosophy from the University of Arizona. He earned his MFA in Photography at Arizona State University and his works have been exhibited nationally and internationally in Albuquerque, Los Angeles, Chicago, New York City, Cairo and Berlin. Quiballo is the recipient of numerous awards, including the ASU GPSA Research Grant, the SPE Student Award, the Nathan Cummings Travel Fellowship and the Contemporary Forum Emerging Artist Grant. He is current based in Phoenix, Arizona where he is the arts editor for JAVA Magazine and he writes art criticism for journals like Southwest Contemporary and Hyperallergic.

Grant Vetter
Dr. Grant Vetter has served as a curator for Fine Art Complex 1101, Artlink, Arizona State University, Autonomie Arts and the Foundation for Art Resources. He has been an instructor in the curatorial studies, art criticism and art theory at Arizona State University. In the past he has served as a teacher at the School for Science and Architecture (Sci-Arch), the Art Center College of Design (ACCD), the University of California, Irvine (UCI), the Norton Simon Museum and the California African American Museum (CAAM). He regularly writes reviews of art exhibitions and is the author of The Architecture of Control: A Contribution to the Critique of the Science of Apparatuses (Zero Books 2012). He is currently working on his second book, The Futures of Art and the Curatorial Generation. Dr. Vetter completed his Post-Doc in the International Curators Program (ICP) at the NODE Center for curatorial studies in Berlin and holds advanced degrees from the European Graduate School (EGS), University of California, Irvine (UCI), the Critical Theory Institute (CTI) and the Art Center College of Design (ACCD).

Redefining the Creator Economy: A Survey of the Digital Arts

Redefining the Creator Economy: A Survey of the Digital Arts

This exhibition explores seven different genres in contemporary art including internet art, digital art, augmented realities, glitch art, post-digital art, NFTs (non-fungible tokens) and the role that artificial intelligence plays in creativity. The interest in these themes has grown throughout the cultural landscape of Arizona in recent years which has a large community of cultural creatives working at the forefront of interactive design, motion graphics, experimental film and video, intermedia art, immersive environments, and much more. With venues like Wonderspaces, the Thoma Foundation, Walter Productions, and the Atari Hotel popping up throughout the state, this exhibition represents a unique opportunity to connect with the growing culture of digital entertainment and fine art practices that have gained a foothold in Arizona and which promise to continue to expand in the decades ahead. Please join us for the opening on February 10th from 6-9pm to see the work of 50+ artists from around the world.